Review: The Lure of Shapinsay by Krista Holle 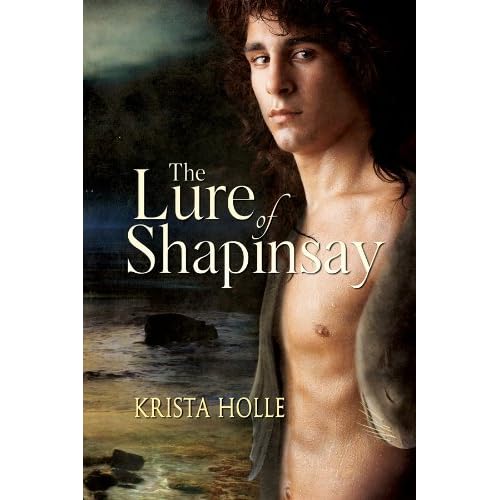 It is not a secret that I have a thing for star-crossed lovers. Even though I sure won’t like to experience it myself, books about star-crossed lover always intrigue me. The pull is even stronger when it’s a paranormal story. So when I was presented to a chance to read a love story between a selkie and a human, how can I resist?

The Lure of Shapinsay presented a lovely story set in 1848, in an island named Shapinsay, off the north coast of mainland Scotland. Among village people, the folk of selkie men and women are passed through generations. The village people acknowledge selkie’s existence but they refuse to have anything to do with the creature. It’s not strange to find men boasting that someday they would catch a selkie woman in their net and take her as a wife, while village women are secretly dreaming of an encounter with beautiful selkie men. Kait Swanney is not one of the women. She is ignorant of the story about the selkie men’s beauty, thinking that their beauty won’t have the power to charm her. Never crossed her mind that later, she has to face a selkie men seeking for revenge.

Eamon is a very young selkie man. He mistook Kait as the murderer of a newborn selkie. He intended to take Kait’s life as the payback, but much to his surprise, he found Kait fascinating to watch. Kait’s love and yearning to the sea confuses Eamon greatly. Just like Kait who is lured by his beauty, Eamon is slowly but surely captivated by Kait’s devotion to him. Eamon is willing to give up everything for Kait, but will his selkie body survive his decision? What if their love story is fated to be another romantic tragedy?

Selkies are creatures who live as seals in the sea but shed their skin to become human on land. Selkie men are gorgeous creature and they have seductive power over human women. The Lure of Shapinsay stays faithful to the legend and I can see how great Eamon has lured Kait. I don’t think that Eamon lures Kait in purpose since he’s too young to really understand the selkie men’s power, but it’s clear that Kait is on the verge of losing her mind because of Eamon. I honestly can’t tell the difference between the effect of the lure or true love anymore in this book. It seems like Kait is affected by a form of fanatical, obsessive love which makes her willing to sacrifice her life just to be with Eamon. Even though Kait’s devotion to Eamon is quite touching (and crazy, I must say), I can forgive most of her actions because they are the result of Eamon’s magic.

In the last half part of the book, I was annoyed by Eamon’s stubbornness. His idealistic view got on my nerves, especially when he knows very well that nothing can be gained if he’s dying. Seem like the proud side of him is a characteristic of a selkie man. Eamon’s young age plays a big part in this story because without his lack of experience and reckless tendency, we won’t have this engaging love story.

Eamon and Kait’s story is sweet and moving. You can’t help but rooting
for this couple from the beginning. I also really like Tipper, the old woman who helps the couple a lot. Sadly, the other side characters are just dropped in the end, like Kait’s brother Blair or Magnum, the guy whom Kate expected to marry. It would be much better if the other characters still make appearance throughout the book.

The Lure of Shapinsay is a great book that I encourage you worth checking out. If you’re a fan of romantic story, then this is a must read! Fans of folktale and mermaid will also enjoy the story. I like Krista’s writing, so I will make sure to take a peek at her new book when it comes out!

“Your cheeks are flushed,” Eamon observed with a relaxed smile that lit up his face like the sun. He awkwardly pushed a blonde straggler behind my ear. His fingers lingered behind my neck as if they were always meant to be there. “Aren’t ye well?”

“It means I’m happy,” I said with a broad grin. “Your cheeks are splotched pink too.”

Eamon touched his cheek like it couldn’t be true then gave me a bewildered look. “Then I must be happy too.”

I rate this book:
Four cups of tea. Amazing! Love the book, it’s simply awesome. I love the tea flavor!  A strong recommendation.

A little note about The Lure of Shapinsay!
Make sure to stop by tomorrow because I will post my interview with Krista! Find out how Krista got her inspiration to write this book and her fantastic answers to my Imagination Escape round!