Review: The Boy in the Smoke (A Shades of London book) by Maureen Johnson 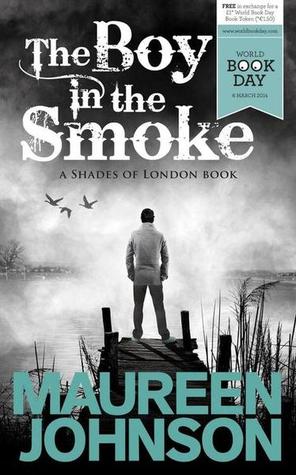 
From Goodreads:
On a cold night, Stephen Dene went to the Eton boathouse to perform a desperate act. But someone stopped him along the way, sending his life in a new and decidedly strange direction–leading him to London, to two new friends, and to a world of shadows and mystery.

From New York Times bestselling author of 13 Little Blue Envelopes, Key to the Golden Firebird and The Name of the Star, The Boy in the Smoke is a thrilling prequel to The Shades of London series.

Since I am in the mood for guy protagonist lately, I decided to venture out of my usual sub-genres in Young Adult and read this book. The Boy in the Smoke is a novella and prequel for a series I haven’t even read, but I managed to enjoy this book a lot nonetheless.

We are introduced to Stephen, a quiet boy trained to obey authorities, and his dysfunctional family. In the cold house where his parents never have time for him, Stephen’s only friend is his sister, Gina. But Gina, cheerful yet self-destructive Gina, will not stay around for long. In the end, Stephen himself has to choose whether to follow his ignorant parents’ orders or to follow his own dream.

The first half of the book feels very much like a typical contemporary YA, so I was quite taken aback when the paranormal stuffs kick in. One of the ghosts still gives me creeps (“He was little,” she explained. “And he made a lot of noise. So I put him in the fire. Everyone was angry.” *shivers*). I like Stephen, he is a nice guy – polite and sincere – and no one deserves better happy ending than him. Mentally kicking his parents for treating him so badly. I’m glad with how things turn out in the end. The ghost-buster things feels kinda rushed, but I guess it’s understandable since we are expected to find out more about it in the first novel.

Maureen Johnson is an author whose book I’d wanted to read for a long time, and I’m glad to say that this novella made me want to read more of her works. The story has a nice flow and it didn’t take long for me to finish it. For a companion novel, I think this book also works well as a standalone. Fans of Shades of London would love this companion since it adds up a lot to the background of one of the main characters, Stephen. Those who are simply curious and in search of a well-written guy POV like me, well, feel free to dive in!

You can tell when your parents dislike you—when they are horrified by the way you eat, at your bodily fluids, at the noises you make and the way you play. You know when you perpetually give them a headache or make them vanish into another room and leave you with the housekeeper or each other or the dog, whatever is handy.

Another way you can tell is when it is the last day of prep school, and they forget to come and get you and go on holiday to Barbados instead.

This is how Stephen Dene finally figured it out.