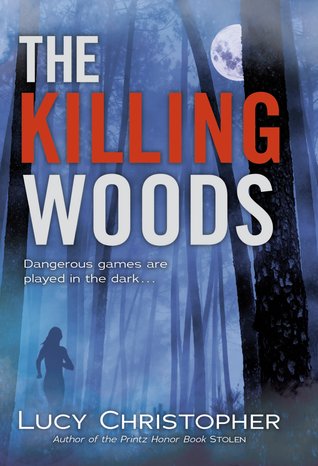 
From Goodreads:
Fatal attraction, primal fear, survival in the forest: From the author of the Printz Honor Book STOLEN, the highly anticipated thriller about deadly games played in the dark.

Ashlee Parker is dead, and Emily Shepherd's dad is accused of the crime. A former soldier suffering from PTSD, he emerges from the woods carrying the girl's broken body. "Gone," he says, then retreats into silence.

What really happened that wild night? Emily knows in her bones that her father is innocent -- isn't he? Before he's convicted, she's got to find out the truth. Does Damon Hilary, Ashlee's charismatic boyfriend, have the answers? Or is he only playing games with her -- the kinds of games that can kill?

I was trapped, held still by his stare. He could have killed me or kissed me then; I would’ve stayed.

The Killing Woods, like it promises, is a book full of thrill, mystery, and secrets in every page. Fleshed out characters and intricately woven storyline, I found myself blown away simply by reading the first chapter.

The story is told from two alternating POVs, Emily and Damon. Emily is the daughter of an ex-army member who is accused of murdering a young girl, while Damon is the boyfriend of the same particular girl. They are the stark opposite; Emily believes that her dad is innocent despite of what everyone tells her while Damon will do anything it takes to prove that his girlfriend, Ashlee, was killed by Emily’s father. However, nobody actually knows what happened that night. Not Emily’s father who is too unstable to tell the truth. Not even Damon who was too drunk and too high to remember anything about the night he last saw Ashlee alive.

In the woods, there is dangerous game played. The woods keep secret. The secrets might not be so pretty when they come out…

Lucy Christopher knows how to write a crooked character, and I give her applause for that. The Killing Woods, while might fall short to me compared to its predecessor Stolen, is still a very entertaining read. As Emily and Damon put the pieces of puzzle and slowly unravel the truth, I felt my heartbeat quickened as well. I warn you not to read this book at night (like I did!) because it would surely make you jumpy at every little sound. The woods in the story feel tangible and the scenes in the book unfolding very smoothly, almost like scenes from a movie.

This book feels more like a mystery-thriller to me and some of the romantic scenes felt out-of-place. Readers who prefer quick pacing in their books may find this book excruciatingly slow. I don’t mind slow pacing in my books, but sometimes I just hoped that things would quicken up a bit. That doesn’t mean I don’t love reading the author’s long passages – she surely knows how to create strange and thrilling atmosphere in her stories.

For those looking for mystery books with a spice of romance, I recommend this book highly. Although I didn’t enjoy it as much as I thought I would (I blame you skyhigh expectation), The Killing Woods is still a book worth to have in your bookshelf. Intriguing and uncommon, The Killing Woods is a perfect book for fans of contemporary with dark elements tucked inside.

It’s because, whatever I do, I’ll always be Jon Shepherd’s daughter: I’ll always look like Dad. I’m branded for life, can’t wash it away. But what else from Dad am I branded with? What other feelings or parts of his personality have I got?

4 cups of tea!
Beautiful prose and such thrilling atmosphere.