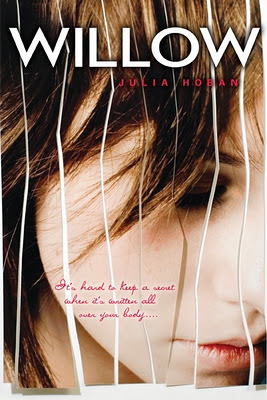 Injuring yourself on purpose by making scratches or cuts on your body with a sharp object — enough to break the skin and make it bleed — is called cutting.

Willow is a cutter. After her parent’s dead, she starts cutting her arm. Every time it becomes too overwhelmed for her, she’ll sneak out. Alone by herself, she pulls out one of her razors — she has many razors as her supplies — then she pulls up her sleeve, and cuts her arm. Sometimes it’s her legs. Or her stomach. Places where people won’t see. And it is amazing. It completely numbs Willow’s other pain.

This pain, this physical pain, was flowing through my veins like heroin, and I was numb, immune to the rest of it, I couldn’t feel anything but the pain, and I knew that I had found a way to save myself. page 313

She taught herself, she has trained herself, not to feel anything except physical pain. She’s completely in control of that. For seven months.

If she let herself, she’d drown in a world of pain. But she can’t let that happen, she simply wouldn’t be able to handle it, not that kind of pain. Thankfully she knows how to prevent such a thing. page 55

Things were simple before she met him. There was the accident, and there was the razor. Life revolved around both of them. Now things are far from simple. As she meets Guy, a senior in her new highschool who finally knows her secret.

Guy can’t let Willow keep injuring herself. And Willow won’t let herself to feel anything but pain. Things are intense in their earlier talks, but as the time progresses, Willow starts enjoying Guy’s company. They talk about books. They talk about Willow’s parents. They even talk about the accident, memory when Willow crashed her parent’s car and made them dead…

Could Guy save her?

Razor has been Willow’s lover for the past seven months.

Is she ready to part company with her constant companion?

Would Willow throw her razors? Or would she become too addicted to pain?

You won’t know the answer until you reach the last page.
written by Unknown at 6:42 PM