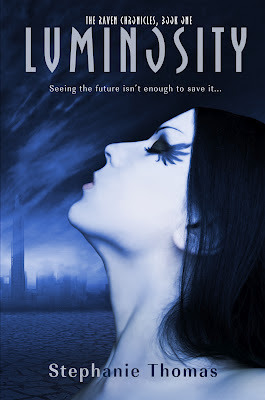 Beatrice is a seer with ability to see the future, but lately she keeps having strange dreams. In her dreams, she meets Echo, a beautiful guy who is wearing the clothes of her enemy. Echo is one of the Dreamcatchers, people with ability to shatter another person’s mind with their touch. Echo is her enemy, yet Beatrice feels strangely attracted to him. Her loyalty starts to waver along with Echo’s constant appearance, and when the Dreamcatchers attack, Beatrice needs to decide what she has to do in order to save her city and the citizens.

To tell you the truth, it’s… painful to finish this book. There are things that bug me a lot when I read this book. I’m very, very confused: why don’t they seem to have war strategies prepared ahead? I’m not asking for strategies on Sun Tzu's level, but I just found it very strange that the seers seem to be very eager to throw their lives away. Why don’t they asses their situation calmly and split themselves into groups, instead of running in a big group and try to kill as many as possible without any strategy prepared? The Keeper, the one who controls the city, doesn’t seem to plan any strategy in order to save her seers. I mean, I know that the seers are disposable, but surely it won’t hurt to keep victims in your side as low as possible, right?

Another thing that I found really strange is the fact that Beatrice’s loyalty is toyed between the Keeper, whom she has practically known all her life, and the man whom she has met only in her dreams. Echo might be gorgeous, yes, but it’s not like I would turn my back against my own team because of the guy whom I only meet in my dreams. What does Echo actually do to make Beatrice believe in him? (Aside from being gorgeous, mind you) I just can’t see myself to betray my own city, my own friends, because of things a mysterious guy said in my dreams. I really wish that Echo had brought more evidences to make Beatrice believe in him.

This book is too bizarre for me to truly enjoy and I’m not a fan of the world-building either, so it took me some time to finish it. I admire Beatrice’s strength though, and I really wished that there were a competition to begin with between Echo and Brandon, Beatrice’s best friend. I like Brandon, it seems like he truly cares for Beatrice. Echo is too vague for me to actually feel anything for him, so I can’t say much about him.

I can’t really recommend Luminosity, but I figure that since many of my friends have read this book and enjoyed it, some of you might as well end up liking it. I might be curious enough to pick the sequel though, because I want to see what will happen to Beatrice, Echo, and Brandon. Hopefully we can see more inside Echo’s head in the sequel, and more background story to enhance the story! :)

I am standing on a bridge, gun cradled under my armpit, combat jumpsuit soiled and stained with the grime of the City. The screams of innocent people reverberate from everywhere around me, and I don’t know which way to run. Everyone needs to be saved, and yet, I cannot save everyone. But somehow, the weight of it is on me, and it’s a heavy, suffocating weight. One I don’t want to carry, never wanted to carry, and yet I must.

Three cups of tea. Not really my cup of tea, but some people might like it.
written by Unknown at 11:13 AM