Interview and Giveaway: The Lure of Shapinsay by Krista Holle

Hi amazing people! Like I told you yesterday, today I have the super amazing Krista Holle, author of The Lure of Shapinsay, in Catch the Lune! Krista's debut novel, The Lure of Shapinsay, is a touching and romantic story about selkie. It is a book that I had pleasure reading it, and I know that you're going to love this book too! You can read my review of this book here. Done reading the review? Now you can proceed to the interview, watch the beautiful trailer, and participate in the amazing giveaway! ♥


The Interview
Welcome to my blog, Krista! I'm so ecstatic to have you in my blog! Please tell us a bit about yourself.

Thanks, Hilda! I’m married with four awesome daughters. There’s also a neurotic cat in the picture who compulsively steals the family’s socks. I’m also a critical care nurse, but my passion is writing. I love collecting seashells, reading, and watching movies, but I’d rather write than just about anything. Like the cat, it’s a compulsion for me and the reason I’ve dubbed myself “one sick cookie.”

Where and how did you get the muse to write The Lure of Shapinsay?

I was first exposed to selkies with the release of the movie The Secret of Roan Inish back in 1994. Then again with the children’s picture book The Seal Prince. For those who aren’t familiar with selkies, they’re beautiful seal men and women from the coasts of Scotland and Ireland. The men are notorious for magically luring women to their deaths beneath the sea.

In the story, Kait falls in love to a selkie man to the point that she’s willing to sacrifice anything to be with him. Would you follow her act if you were her?

You must understand that Kait was under the influence of the “Lure” and incapable of acting rationally. So yes, if I encountered a beautiful selkie man, I’d lose my head too. Hopefully I’d live to tell the tale, but if not I’d have a glorious death.

In The Lure of Shapinsay, the characters are speaking in Irish slang (well, I think they speak in Irish slang. I’m sorry if I’m wrong! :) ). How did you learn about the old slang?

The dialect is actually an old mixture of Scottish and Norse—the real dialect of the Scottish Orkney islands. I wanted my story to have an authentic feel so I researched Orcaidian stories actually told in the old dialect.

What do you think would be the best theme song for The Lure of Shapinsay?

I love Brandon Flower’s “Crossfire”. It tells of a relationship caught between heaven and hell. This is Kait and Eamon’s relationship. There’s a sweetness at being together, but the odds of a land/sea relationship working are pretty slim. It’s agonizing at the same time.

Watching your dress as you turn down the lights
I forget all about the storm outside
Dark clouds roll their way over town
Heartache and pain came a-pouring down like hail, sleet and rain, yeah
They're handing it out

Lay your body down


Imagination-escape round!
If you were a Greek Goddess, who do you think you would be?

I’d be Daphne so the beautiful Apollo would only have eyes for me.

Selkies of course! All three creatures have the potential to kill you, so if I’m going to die, I want to have a smile on my face.

You constantly had dreams about a guy you have no idea whom, and then one day you suddenly bumped into him. What do you think he would say to you?

“You’re going to think this is crazy, but I just saw a portrait of a woman from the 18th century and you look exactly like her!”

Which one do you prefer: instant love or instant hate?

I adore love stories, so it would have to be instant love. I’m a romantic at heart.

Thank you for answering the question amazingly, Krista! Not that I expected less from you! ;) I think it's very interesting that Krista chooses Daphne - we all know that it's a sad love story! To add sprinkles of awesomeness to this interview, here is the book trailer for The Lure of Shapinsay! :)

A little bit about Krista:

Krista has been writing since she was nine-years-old when she scribbled out her first adolescent work entitled Merish, the completely illogical but heartfelt story of a girl who was part mermaid, part fish. As a young mother, Krista added to her repertoire some middle grade readers and picture books she’s wary of mentioning.

In 2004, Krista began an intensive four year period working part-time as a critical care nurse while homeschooling her four children. During this hectic time, courses of writing were taught and learned, and rules of syntax were scolded to memory. Ironically this period of study equipped Krista with the tools she needed to enter the next phase of her writing experience. Now equipped with the mysteries of the comma, Krista was ready to tackle a much bigger project—a full fledged novel.

After the kids were enrolled in public school in 2009, it occurred to Krista that there is an insatiable audience of women and girls who want to read books filled with stories about true love. Convinced that there was an unfulfilled audience waiting for what Krista loves to write—romance, she sat down in the family’s dungeon, a.k.a. the basement, and began to furiously type. In no time, her first novel was drying on crisp white paper.

Krista currently resides in Midlothian, Virginia with her husband, four daughters, and an eccentric cat with an attachment to the family’s socks. She continues to write obsessively every chance she can get. 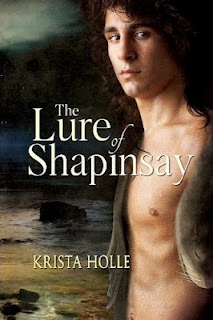 Grab your copy of The Lure of Shapinsay!
Ever since Kait Swanney could remember, the old crones of the village have been warning her to stay away from the selkies. They claim that like sirens of old, the seal men creep from the inky waters, shed their skins, and entice women to their deaths beneath the North Sea. But avoiding an encounter becomes impossible when Kait is spotted at the water’s edge, moments after the murder of a half-selkie infant.

Unexpectedly, Kait is awoken by a beautiful, selkie man seeking revenge. After she declares her innocence, the intruder darts into the night, but not before inadvertently bewitching her with an overpowering lure.

Kait obsesses over a reunion deep beneath the bay and risks her own life to be reunited with her selkie. But when she lands the dangerous lover, the chaos that follows leaves Kait little time to wonder—is it love setting her on fire or has she simply been lured?


The Giveaway
Giveaway time! YAY!! One (1) lucky person will receive this amazing pack consisting of: 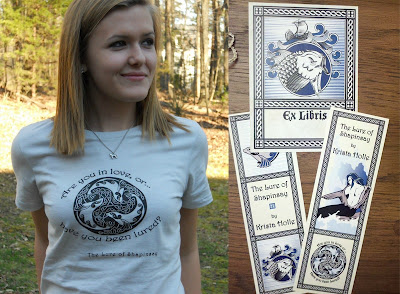 T-shirt, bookmark, bookplate, and ebook of The Lure of Shapinsay!


Giveaway opens INTERNATIONAL whatever part of the world you are! Many thanks to  Krista who provides this awesome prize! Winners will be notified via email, and all the entries are accepted before May 27.  Good luck guys! ♥ :)

a Rafflecopter giveaway
written by Unknown at 10:50 PM